[As with all posts on AtAnchor.com, click on the photos to enlarge]

It was Sian’s birthday on Friday so we stayed ashore and played with her birthday gift. Sian got the hang of it very quickly. But Paul? Well let’s just say it was all very wobbly!

On Saturday we headed out on Sonas for the weekend. We headed north on the ICW, across the St John’s, past Fort George River and on past  Fernandina on Amelia Island. We looked up into the Fort George River as we passed and were shocked at just how many boats were there!

We finally anchored off the west side of Cumberland Island. We went ashore with Grace and walked around in the heat for a while before taking her back to Sonas for some cooling. We then headed back to the south end of the island for a longer walk.

We saw a herd of the wild horses that live on the island, including a young foal and a mare that was obviously pregnant.

I looked at Sian and said, “well we have a  just born foal and a pregnant mare, there has to be a stallion around here somewhere?” And within a half second she replied, “probably that guy over there”, and then she fell about laughing! My wife can be a bit smutty sometimes!

That evening we motored over to Fernandina and anchored just outside the mooring field. Our son Matthew was driving up from Orlando to surprise his mother on her birthday. So at the appointed time I suggested that we go ashore for ice cream. As we were finishing up Matthew turned up! A nice surprise for his mother.

On Sunday the three of us went ashore and had breakfast at 29 South. After which we left Matthew wandering the many art stores while we returned to Sonas, lifted the anchor and headed south to Fort George River. We arrived later afternoon as most of the day boaters were leaving.  Matthew followed on by car later and I went and picked him up on the RIB. He stayed for the rest of the day and left after dinner to return to Orlando. By eight pm the anchorage and sandbar had emptied out of all but the few boaters that were staying overnight. Some obviously had a great time!

We has a pleasant evening on board, we watched The Intern with Robert De Niro and Anne Hathaway. Which turned out to be a pretty decent, light movie for watching on the boat.

On Sunday the day started hot going on hotter. Low tide was around 10:30 so we were able to walk the sandbars with Grace. Soon after the day boats started arriving. We waiting until about two hours after low water to ensure that we had enough water at the river entrance, before upping anchor and heading back home to avoid the madness.

It was great to see so many Star and Stripes flying on this weekend dedicated to remembering our fallen. 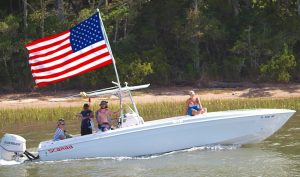 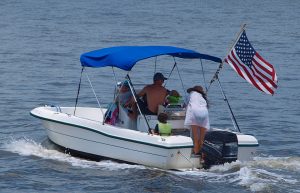 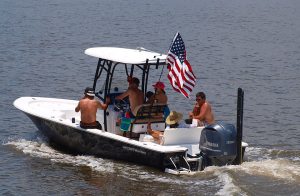 We went through the lock and tied up at home dock. We had planned on tidying up and hosing Sonas down with fresh water. But our neighbors had watched us come in, called and said that the ribs and sweet corn were ready, come on over and jump in the pool.

Sonas had to wait until Tuesday to get a tidy-up!

The photos from the weekend are here in this video. Click on the little square at bottom right to watch full screen.