We left our home dock on  Thursday evening as we wanted to get an early start the next morning. The tides were not great for leaving the lock and navigating  the channel into the ICW on Friday at a time that suited. We took SONAS to Sister’s Creek, just north of the St John’s River, and tied up at the public dock there. Soon after tying up we got a visit from Captain Browne Altman. Captain Altman lives near the public dock and when he sees a boat tie up he comes over and offers his services – should you want a ride to the store, or just information on the area.

On Friday morning we departed the dock at 7:00am and entered the St John’s River via the short run on the ICW. We headed east to the Atlantic, passing Mayport and the naval base there. Once we were able to make our turn north we set a course for Brunswick Harbor, St Simon’s Range, at 10 degrees from the mouth of the St John’s.  The winds were calm, with only the usual Atlantic swell for the stabilizers to deal with. We passed through the shrimper fleet as they worked the shallows, and had a pleasant trip north.

We entered the Brunswick channel and turned  north into the Morningstar Marina/Golden Isles, and were all tied up and engines off at 1:30pm. George and Carolyn on September Morn had already checked in, and the other Queen’s Harbor boats soon followed, having come up through the ICW. There were Escape with Frank and Julie, Last Call with Bob and Eileen, M&M with Martin and Marilyn, and Aquavit with Dick and Marilyn. Dan and Lydia had driven up for the evening and stayed with us in our guest cabin. So there were 14 for Docktails and dinner.

At 5pm we took the Queen’s Harbour Yacht Club mobile bar ashore and set up for the Docktail party. After that Dinner at Coastal  Kitchen, before retiring to the boats for the night and another planned early start in the morning.

We had the boat awake at 6am, and sent Dan and Lydia off on their car journey back to Jacksonville with travel mugs full of coffee. We retraced our route back out into the Atlantic and made the turn north towards the Tybee Roads Range which would take us into the mouth of the Savannah River, leading to Hilton Head.

We had another calm start to the day. The sun gave us a wonderful display as it rose behind some low lying clouds, which soon burnt off leaving blue skies. Rusty Wilson, took in the sights of St Simon’s as we passed by the lighthouse and pier!

We had estimated that the day’s trip would take us around 10 hours, so we planned for 11 just in case. We got to Shelter Cover Marina around 3:30, meaning we had made good time and got there after nine hours running.  Our Lugger 174hp engines are rated for 2400 RPM, with continuous duty at 2200. We ran them an 1800 and averaged ~9 knots. One lesson learned that day was to make sure you do not leave the fridge door open for even a second! Sian was getting some milk out and left the door open as we took a swell. All of the beer and wine came crashing out! Nothing broken or  spilled though!

When we got to the marina we headed to slip I6 as instructed by the harbormaster.  After we had threaded our way through the pretty tight marina he decided we would not fit into that slip and directed us to another slip. Sian had already set everything up for a port-side tie and the new slip was a starboard-side tie. Seeing this the harbormaster directed us to go back to Dock C, which was right at the entrance to the marina. Since there was no turning space in the marina, we had to reverse back through the marina to Dock C, where we finally made SONAS secure. The end result was very satisfying at Dock C was in a much better location for all of the shops, restaurants and shuttle bus to the beach!

Since the last of the fleet was not arriving until the next day we were waiting until then to have the next Docktail. So those that were present met up at Scott’s Fish Market for dinner and drinks.

Our plans were to have us stay at Shelter Cove with the fleet until Wednesday, at which time the boats were splitting up and going their own way, wither back home to Jacksonville, or to other destinations for the rest of the week.

Today Sian and I took the shuttle, called the Dune Buggy, to the Palmetto Dunes Beach. The temperatures were starting to get up into the mid-ninties and would stay there all week. We walked along the water’s edge for an hour before going swimming and then lunch at the beach-side bar. 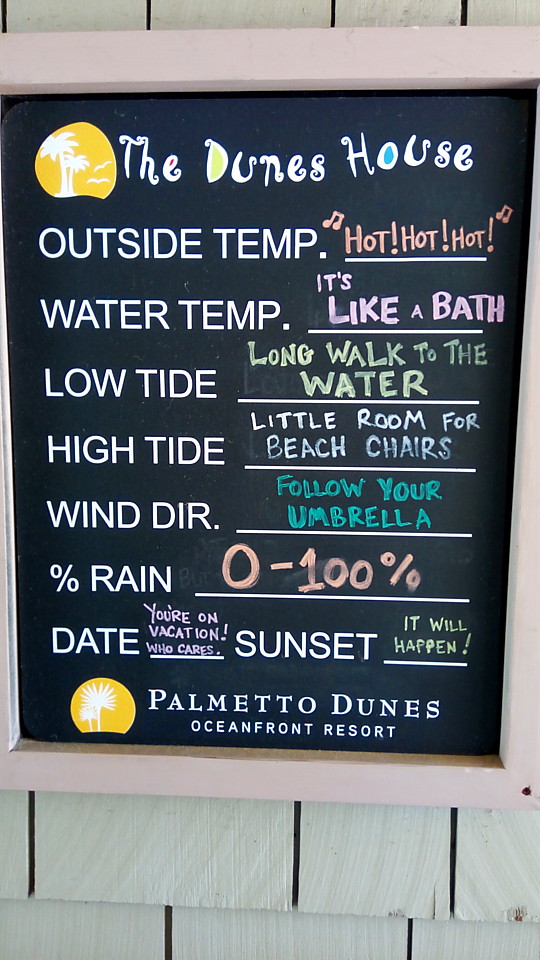 We got back to SONAS, had a shower and prepared for the Docktail party which would be on the dock by the boat. Everyone arrived, including some guests staying with Bob and Elaine. We laid out the traveling bar, put out the food everyone had prepared and Captain Frank fired up the grill for burgers and sausages! We took the opportunity to chat with the neighboring boaters on the dock and had a very pleasant evening’s entertainment.

We spent a couple of relaxing days on Hilton Head. We launched the bicycles and rode to the town center, enjoyed the beach, and beach-side bar, again, joined the group for dinner at Bucci’s Italian restaurant, and watched the weekly Tuesday fireworks from the fly bridge.

Since we were only doing the short run from Hilton Head to Savannah today we started later, leaving the marina around 9am. We estimated that it would take around three hours to make the trip. We retraced our route to the Tybee Roads Range and then turned up the Savannah River. We then realized that we were bucking against an outgoing tide which took about two knots off our speed. This added an extra 30-45 minutes to the trip.

We very soon met with what would become the norm for the next couple of days. A huge container ship coming down river. Savannah is now the third largest port in the US after LA and New York and these large vessels would pass us day and night as we sat at the dock. Unfortunately some of them chose to salute the Waving Girl at 6 am in the morning, as and we were docked right beside her it was a bit of a rude awakening!

Read the story of The Waving Girl here:

We also passed Old Fort Jackson guarding the river. As we approached the fort they made us jump by firing off their big gun. I looked at my watch and, given that it was the unusual time of 12:21, I realized that they had fired it at us!

We had planned on doing plenty of sight seeing while in Savannah. Unfortunately it got very hot during the two days we were there. In fact Thursday it got to 98f with a “feels like” 106f. That’s 41C for those on the celcius scale!

We did manage some walks, visiting some art galleries. We also took an organized tour of the many squares in Savannah and learned some of the long history. We saw where Forrest Gump sat on his bench and told his story ( although his bench is not there as it was causing a traffic hazzard), the house where the Midnight in the Garden of  Good and Evil was set, and learned that the people buried under many, if not all, of the city’s monuments are not the same people memorialized by the monuments themselves! We had used Trip Advisor to identify a couple of good restaurants and ate in Circa 1875, a French-style bistro and Chive Seafood bar. Both of which we highly recommend.

At first light Friday morning we cast off and started our trip back to Jacksonville. We went back down the Savannah River and out through the Tybee Road Range, where we headed south towards St Simons.

As we passed the waving girl we gave her the customary salute.

At sea we encountered some heavy swells on the bow being kicked up by the wind which had turned south. These made things a little uncomfortable as the side-stabilizers could not fully offset the impact. Sian declared the food and beverage service suspended until we had better conditions! After about three hours the seas did flatten out somewhat and the trip became quite enjoyable again.

We arrived at St Simon’s around 4:30, tied off and washed the substantial salt off the boat. We decided to change our dinner plans and called the restaurant and booked in. As we were eating a substantial front came it and along with it some fierce wind squalls. When we got back to SONAS we saw that our cockpit seat cover had been torn off and was no where to be found. This was surprising as it is fastened by a runner along the top and six fasteners. We walked up and down the marina hoping to find it, but it was long gone.

We had been watching the NOAA forecast for Saturday since we saw that there was a couple of fronts coming through in quick succession. The forecast was for 20-25 knots from the north with seas rising to eight feet. So we made the decision to run the ICW back to home port.

As we left the marina the winds were fairly calm and we started second-guessing ourselves and wondered if we could indeed go outside. We decided that discretion was the better part of valor and stayed with the ICW. The tide was up and we went through Jekyll Island cut, which is pretty skinny at lower tides.

We then had to head out to the mouth of St Andrews Sound south of Jekyll to avoid the large shoal there. As we went out we noticed that the winds were no where as forecast. Still we stayed inside. We passed the Kings Bay Submarine Base and Fernandina before arriving home. It did add about an hour to our last leg.

We arrived at home dock at 12:45pm. During the trip we burned 246 gallons of diesel excluding generator, giving us a running rate of approximately 1.5 miles to a gallon. Average speed was ~ 9kts.

Video of all of the photographs here: