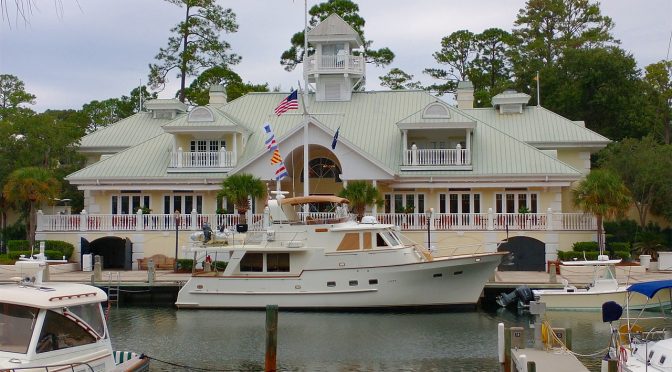 We provisioned Sonas for a ten day fall trip from Jacksonville to Hilton Head, South Carolina and back.

Because the tides weren’t right for us to leave our home dock early in the morning of Saturday Oct 10th we left the previous evening and tied up at the local free dock at Sister’s Creek.

The next day we headed north on the AICW. We looked to see if we could go outside but today the weather was calling for five footers so we decided to stay inside. We cruised through Fernandina (where the massive crane that will be cutting up the Golden Ray still sat). Knot Fast the Great Harbor that had visited with us in Queens Harbor the previous week was also tied up at the marina.

Then past Kings Bay Submarine base where we saw a nuclear sub in the maintenance bay.

We carried on up to St Simon’s and our overnight reservation at Morningstar Marina. On entering St Simon’s Sound we saw the Golden Ray car carrier laying on its side on the shallows right off the pier.

After tying up at the marina we took on 250 gallons of diesel, which would easily see us through this and the next couple of trips. We had booked a table at the Coastal Kitchen Restaurant and had a really nice socially distancing seafood meal.

The next day we left soon after first light, which these days is around 7:30am, and continued north. Our aim today was to stay at the marina in Sunbury GA. The wind was still blowing some so offshore was not an option. In the past we have been able to run directly from St Simon’s Sound to Calibogue Sound in Hilton Head, but with the heavy seas and shorter fall days we would have to break the trip into two, albeit shorter, days.

We had a nervous half hour as we hit the notorious Mud River right at low tide. This part of the AICW shoals badly and we were showing as low as 0.8 feet beneath us as we went through – slowly!

We arrived in the rustic village of Sunbury mid-afternoon. That evening we dined at the Sunbury Crab Company restaurant. We had heard good things about the restaurant, but found it just OK. With the pandemic it was very quiet. We ordered a bottle of cabernet and were told that the bar man was using the last bottle for bar pours. But she had a bottle of Merlot. OK we said, and she turned up with a one and a half liter bottle.!We sent it back and stuck with beer. Clearly wine is not a big seller in these parts!

The next morning we headed out through St Catherine’s Sound into the Atlantic. The wind and seas had died down enough that we could run outside today. We had a very comfortable run into Hilton Head.

We had wanted to stay at the Shelter Cover Marina as we had stayed there before and found it handy for all of the restaurants and stores. However they had a waiting list for all of October. So instead we had booked into Windmill Harbor Marina.

Windmill Harbor is similar to our home set up. It is a marina in a neighborhood with a lock. When we arrived at the lock we found it narrower than our home lock. At 19 feet wide that gave us less than two feet of clearance on either side! As we got into the lock Paul went to use the bow thruster and found it wouldn’t respond. Rather than take Sonas down an unfamiliar fairway and reversing into an unfamiliar slip when we didn’t know what was going on mechanically, we asked if we could have a “lay-along” tie. The marina did not have one available but the harbormaster called over to the South Carolina Yacht Club asking if we could use theirs and they were fine with it. So that’s what we did!

We had planned on staying there for three days and had actually arranged reciprocal amenities with the yacht club from our club. We walked the neighborhood with Bella a few times a day and ate at the yacht club every evening The food was wonderful and we met some very nice people!

Paul had tried to get a mechanic to come look at our bow thruster with no luck so we would have to leave that until we got back to Jacksonville.

On the day we had planned on leaving, Thursday the 15th Paul went to start the engines and found the batteries depleted. We had been plugged into shore power and charging so this was a surprise. Paul checked the start batteries and found them dead. They were only five years old. We arranged with the yacht club to spend another night and Paul found a company to come check the batteries and swap them out for new ones.

We finally left on Friday with new batteries. Though this was not quite the end of our mechanical issue!

Our aim today was a small remote village in Georgia called Kilkenny. It was the perfect distance for a short day’s run. We again were able to run outside and back in again at St Catherine’s, then a short trip back up the ICW.

Kilkenny marina was interesting. We watched as small shrimpers came in and offloaded. We also watched as they used a crane system to launch and lift small boats. The banks were so steep here that a ramp was out of the question. The marina charged a dollar a foot for a launch and retrieval! The marina did not have cleats but low wooden pieces that you wrapped your lines around.

We had booked into the Market 107 Restaurant next door and had another seafood dinner, but we reckoned that the meal we had at Coastal Kitchen in St Simon’s was the best of the trip.

Next day we were off again. We had originally planned on staying at Morningstar Marina in St Simon’s again, then Cumberland Island the next night before home. But decided to go on to Jekyll Island Marina today and then go straight on home the next day, Sunday the 18th.

We passed by the Golden Ray again and entered Jekyll channel on low tide. We eased our way to the marina, often with less that two feet beneath the keel! We cooked a couple of steaks on the boat deck grill this evening!

On Sunday the 18th we were again off at first light and followed a small sailboat out of the marina. We caught up to her as we made the turn into St Andrew’s Sound. The AICW in this area can be problematic as there are shoaling sandbars right across the middle of the sound. Boats transiting the AICW have to go out pretty much to the mouth of the sound. Today it was blowing on shore and nice big rollers were coming it. The little sailboat tucked in behind us to help it with the seas and then cut across earlier than us as it did not draw as much. We rounded the buoy getting hit somewhat by quite heavy seas but it because easier once we had them on our stern quarter.

We again passed inside Cumberland Island, past Fernandina and we were tied up at home dock by 3:00pm. We did encounter an overcharging issue on our start batteries today. We suspect that one of our Balmar battery regulators has gone bad. We also suspect that is why we had the battery issue while we were in Hilton Head. Sonas is going to the yard for some new teak soon, so we will have them investigate the issue.

Click on the first photo below to scroll through them or start a slideshow.