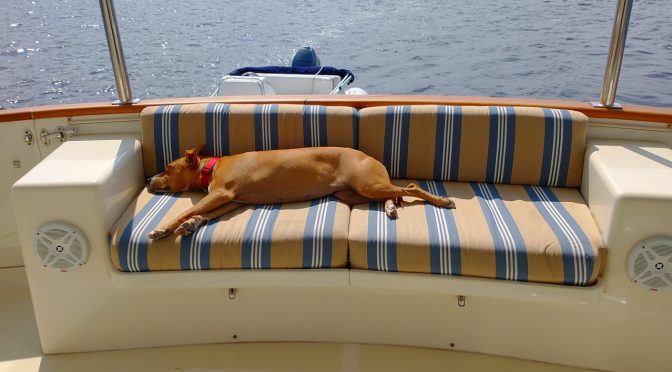 For the third week in a row we had decent weather to do a mid-week mini cruise on Sonas. We left in cool conditions on Wednesday morning helming from the pilot house. Instead of using the small tender from our boat deck, which would have entailed using the davit to launch and retrieve it, we towed our larger 15′ RIB. This would make it easier to use and was much more stable for Paul getting off and on given that he is still limited by a back brace.

As we passed Fernandina we heard a Securite call over the VHF advising that a naval ship was on the way in through Cumberland Sound and to keep clear. The rule is no approach within 100 yards and go to steerage speed only within 500 yards. We had time to get across the Sound and into our anchorage before the Ohio Class submarine appeared and went towards the Kings Bay submarine base.

We were also passed by the mega yacht d’Natalin IV which we had seen just last week down in St Augustine.

We arrived at our anchorage off the Sea Camp dock in Cumberland. The day had turned warm so we headed off to the island for a walk across to the ocean-side beach. On landing Paul used the on-line National Parks payment system to pay our entry fee. It is $10 per person for seven days, under 16 years old is free.

Dogs are allowed on the island but not on the ferry so the only way they can get there is by private boat. Bella was the only dog on the Island! We had a gentle two mile walk through the sea forest and on the unspoilt beach before returning to Sonas.

Just before Sunset Paul launched the drone and took some video of the anchorage and the island.

The next day, Thursday, we again walked the beach in the morning before breakfast and some boat chores. After lunch we headed across and tied up at the Fernandina Harbor Marina. Some friends had come up in their boat and we were going to spend the evening with them.

We went to Joe’s Second Street Bistro and had an excellent meal in their courtyard before heading back to Sonas for conversation and wine!

We had left our plans open for Friday. We were either going to head home or down to one of our favorite anchorages on the Fort George River. Instead we decided to return to Cumberland Island. We again walked the island and beach, with Bella meeting wild horses and deer for the first time!

Saturday turned up very breezy, with 20 mph winds, but we returned to home dock without incident.

Click on a photo below to enlarge or to start a slideshow of the photos.

One thought on “Cumberland and Fernandina Trip Oct 2020”