As always with boat ownership, there are plenty of things to do during the “quiet” fall and winter months, though here in Florida winter is relative! One thing we did notice after we had written this is that it doesn’t seem like a lot when you are doing these things one at a time, but looking back we got through a substantial amount – albeit some small general maintenance stuff.

Some we did ourselves, some we “outsourced,” and some were general ongoing maintenance.

We don’t have much wood on the exterior of Sonas, but all of the rails are teak. Over time the salt and sun take their toll and the varnish starts to flake. It was time for some light sanding and a couple of coats of Helmsman.

Sonas has a teak and holly floor. While not exposed to the elements as is the exterior bright work, it does get scuffed and scratched over time. We gave the galley and salon floor a light sanding and then two coats of Minwax polyurethane.

The salon walls were also looking a bit dull so we cleaned these and coated a couple of times with Murphy’s Oil Soap.

We also noticed that the varnish on one of the interior window sills and frames needed attention,most likely because the window was left open during a salty run. We sanded those down and gave them a couple of coats as well.

One of our biggest aggravations in the two years we have owned Sonas has been the 24 volt halogen ceiling lights. The bulbs on these go out on a frequent basis, and if they don’t go out they come loose and constantly need to to pushed back in.  So we decided to replace all 34 of the lights with 24v LEDs.

Sonas had a very nice Ekornes recliner and foot stool which unfortunately was getting well past its best. With the two person sofa, this only provided seating for three in the salon (though we do have two stools at the galley counter). So we swapped out the recliner for two replacements, now we have plenty of seating for four. 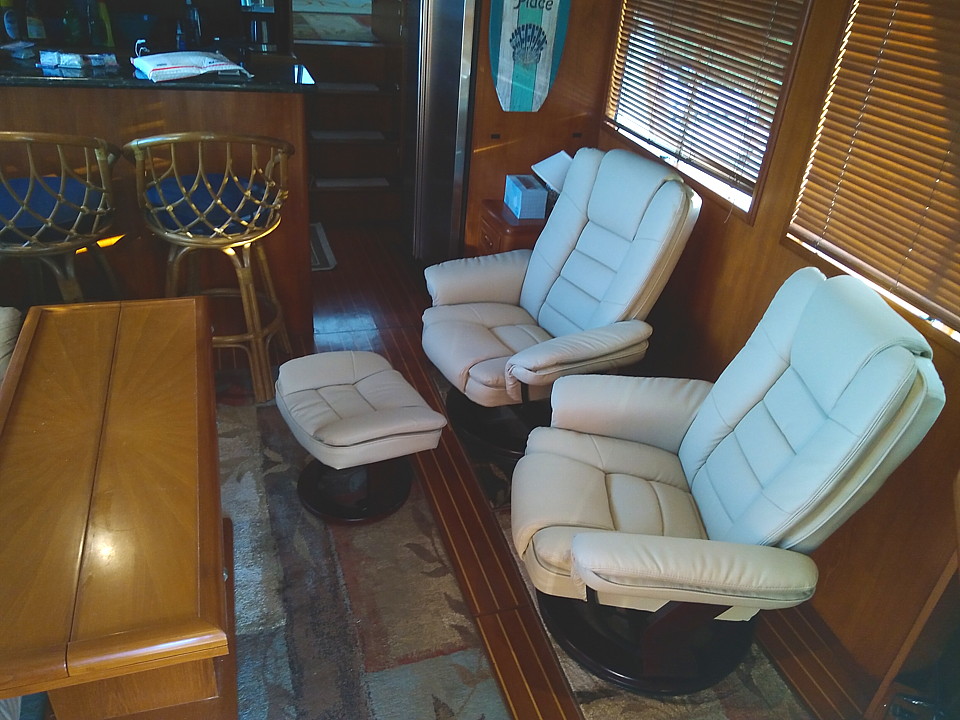 We have three lights above the galley counter which are controlled by a resistor type dimmer switch. This had gone bad. Also, since we were replacing the lights with LEDs we needed a different type of dimmer. After searching high and low for a 24v dimmer, we decided to go with a simple on/off switch instead, especially since every time we switched those lights on we turned the dimmer to full anyway!

A couple of times in the Bahamas last year we tied to piles that were well in front of our spring cleats, necessitating tying two of our lines together to set the springs. So we decided to buy some 50 foot 3/4 inch lines to have on board for those times we have to do that again.

After a winter being pushed up against the concrete dock and sitting partially in the water the fenders were looking a bit shabby. After a good wash and spray with restorer they come up a bit more ready for the new season – though I do see some new fenders in our near future as they still look a bit tired.

We also added some new artwork – the nicest piece was a blown up drone photo of Sonas at Williams Cay! You will want to click on this photo to enlarge it – we are really pleased with how it came out.

For our three month trip to the Exumas we put a small freezer in the corner of the salon to ensure that we had enough frozen goods for the duration. Since in 2017 we will only spend about six weeks in the Abacos before three months in the Chesapeake (where fresh supplies are readily available) we removed the freezer and stored it in the garage.

One side benefit of a nice long cruise like three months in the Exumas is that you really get to know your boat. As things cropped up or were found we kept a log of the items we wanted our yard to work on. So we took Sonas over to Lambs Yacht Center on the Ortega River with the to-do list. We had divided these into must dos, the A list, and if time and cost allowed a B list. So we had the following completed: 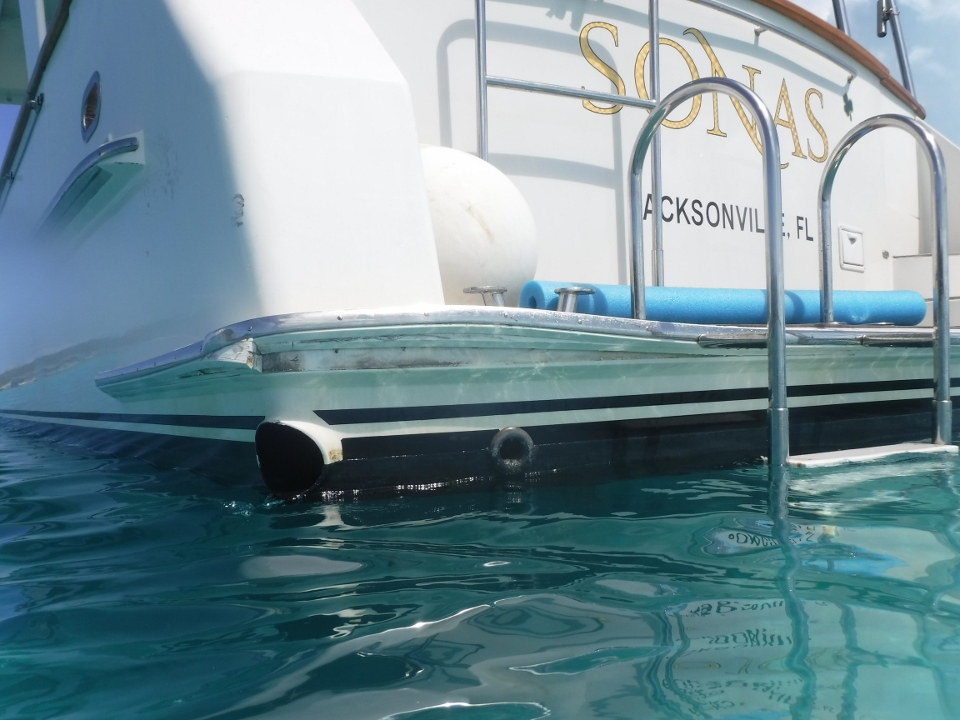 The Stidd pilothouse helm chair had seen better days. So we asked Stephen Mousa at Mousa Auto  and Marine Interiors to redo it. We also had the metal powder coated to the same color. We are very pleased by the finished product!

Our galley faucet had corroded and siezed in one position. The faucet was one where you could extend the faucet end with a hose. This hose had also blocked up over time reducing the amount of water coming out. So we had Atlantic Coast Plumbing and Tile come and swap out the faucet for a new one, which did not have the hose extension. Sometimes simple is best on a boat!

Mike from MPG Electronics resolved some issues we were having with the electronics. The Autopilot was not getting a feed from either of the GPS systems, or the computer.  Seems the J300X computer had gone bad so had to be replaced by a used part as they no longer make these. Also the flybridge monitor was not working so that we could monitor the engine room and rear cameras while underway. The power supply had gone bad so we had to order a replacement from the original manufacturer in Canada.

Because we anchor out a lot a fully working and reliable tender is critical. We took the Novurnia RIB and its 25 horse power Yamaha to Isle of Palms Marine at Palm Cove Marina for a service. This included emptying out the fuel tank and cleaning it, as well as replacing the fuel hose and bulb.

In early February I had Ryan from the Pier 88 Diving franchise here is Jacksonville come and give the bottom a good clean and replace the zincs.

Josh from Control Master Inc, the mechanics that we use on Sonas, came and completed an annual service on the Lugger engines and Northern Lights generator.  He de-gunked both engine heat exchangers, replaced a generator fuel injector valve and the generator fresh water circulating pump.

One area we are struggling with is getting the boat compounded and waxed. We have had three people around to look at her and so far so one works on boats this size. Asking around it seems there is a dearth of detailing companies in Jacksonville. Still waiting to get this completed.

All-in-all, we are more than ready for the season!