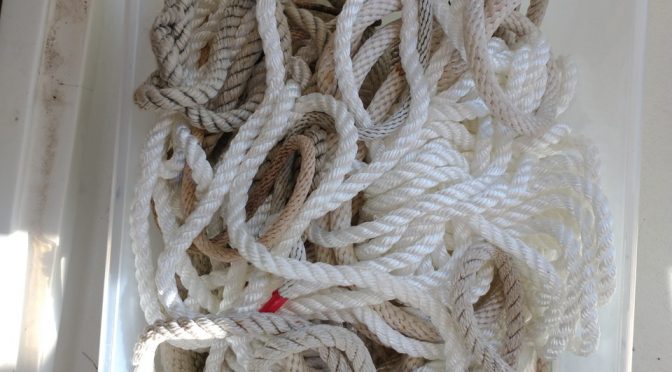 We thought there might be some interest in how we provision for three months in the Bahamas. While there are some locations with decent supermarkets, these are usually few and far between. Where they do exist the normally have decent fruit and veggies, but the meat does leave something to be desired – apart from chicken that is! As for beer and wine, both are extremely expensive and the wine usually at the lower end of the quality scale. So we have set Sonas up to hold most of the provision for the three months, planning to get fresh where we can.

Here are some of the things we do.

Previously we have loaded Sonas up with bottles of wine stored in plastic crates. This resulted in bags and bags of empty bottles stored in the lazarette since recycling in the Bahamas is non-existent. Someone then told us to check out boxed wine with the statement “boxed wine these days is not the same as in our student days!” So we tried all of the brands without success, we just didn’t like the wines. As a last ditch effort we tried Costco’s Kirkland brand of Cabernet and voila! So now we buy these boxes and take the bags out of the cardboard and store the bags in the crates!

We do take some bottled wine, the Prosecco and for visiting other boat. These are put into a crate and a sock is put on each one to stop them from rattling!

Talking about cardboard, it s a big no-no onboard Sonas for two reasons. The first is the lack of recycling mentioned above, the second is that bugs are attracted to the cardboard as they just love to eat the glue used on it. So everything that comes in cardboard is repackaged. From bags of chips, to beer, to frozen and fresh foods. The only cardboard we allow on board is that which is on items going into the freezers. This is usually minimal.

We have a standard domestic side by side fridge freezer which we fill. However that is no where near big enough for three months worth of food. So we added an inexpensive 5.2 cu ft chest freezer which fits nicely in the corner of the salon. We then have small plastic totes where we spread the different meats and frozen food across so that we have a selection to use from each tote as we work our way down the freezer. If we put all chicken, all steak, all pork in one tote each we would be forever lifting totes out to get at what we wanted!

We also slice side vegetables like peppers and onions, freeze and bag them before putting on Sonas.

New this year is our Aero Garden. We use this small hydroponic garden to start off fresh tomatoes and vegetables such as lettuce before transplanting into bigger plastic pots. It works very well. The LED light is very bright so that is stored in the guest cabin with the door closed!

And finally a few logistic items we completed before we head off.

We need to mark the depth on the anchor chain every few years and it was due. We use the RYBWG code every 25 feet.

There were two old CRT television sets in the cabin when we bought Sonas and we had never taken them out. Since they are really deadwood it was time for them to go!

We also cleaned out the flybridge lockers which had been needing a clear out for a while. Paul is a compulsive hoarder when it comes to pieces of rope – he will just not throw any out. So he got brutal and removed all of it. He still couldn’t throw all of it out though, so we still have a tote full put back into the flybridge locker! “It will always come in handy,” says he!

Finally we loaded the two paddleboard onto the fly bridge and tucked them under the table until we get to the Bahamas and inflate them. Then they will be bungeed to the rails.

We are ready for the off!