On Monday we looked at the charts and decided that Black Point did not seem too far from our anchorage so decided to walk into town. The main objective was to replenish our dwindling fresh milk supply. More on this saga later!

We walked up the beach and past the marina basin and abandoned construction equipment that we described in our last post. They really did just walk away from this project.

We followed the construction road into town. It was heavy going as the “road” was crushed limestone. Half way to town Jane from Elizabear came along in a golf cart with Gus their dog. She was trying to get her laundry done in town but the lady running the laundry had gone to Nassau, so she had “borrowed” a golf cart from a guy that was minding the store and was, in good Island attitude, trying to do what she could!

We got into Black Point, and found no milk or anything else that we needed. So we stopped by the Scorpio restaurant for lunch. We again heard the story – “we have no fish.” So we had a couple of burgers and Kaliks.

That evening Tom and Jane from Elizabear came over. Paul and Tom disappeared into the boat’s bowels for most of the time, discussing engines and “stuff.”

On Tuesday we took a can of “Never Dull” to the stainless, buffing out all of the salt stains and other imperfections that tried to gain a foothold. Other than that we generally had a lazy day on the beach.

So on Thursday we lifted the anchor and slowly cruised to Staniel Cay. We hailed the fuel dock saying that we wanted to top up our water tanks and take on some diesel. We were instructed to wait until the fuel dock was cleared. This resulted in Paul keeping Sonas held off the dock in wind and current for nearly 45 minutes as boats moved around us. Mixed directions from the fuel dock also resulted in Sian changing fenders and lines twice – an annoyance which she soon expressed to the captain!

We finally got in and took on water and a small fuel top up. Sian went off to get milk and veggies, only to find that the supply boat had not come in and there was not much available. The grocery store even suggested that the boat may not come this week due to it being Holy Week!

We did think about anchoring off Staniel to see if the boat came in later that day, but decided to go as we had planned and visit Pipe Cay, about six miles to the north. Just as we finished anchoring at Pipe Cay we saw the supply boat heading for Staniel!!! Arrrgggghhhhh.

See the story of what we did next by reading here: http://atanchor.com/?p=1199

As we were coming into Big Major anchorage we aimed for a beach which did not have pigs so that we could easily take Grace ashore. After setting the hook off an appropriate beach we found that we had coincidentally anchored right beside Mint Julep – hull #2 of our own boat model, where we were hull #1.

As we were anchored right by the Fowl Cay Resort, and knew that they had a very nice restaurant we tried to get a table for dinner but they were fully booked. We did get our name on the list for the next day however- Easter Sunday!

On Sunday we got a glimpse of how the other half live as a sea plane landed in our anchorage, navigated its way through the anchored boats, and pulled right up to Pig Beach. The passengers hoped out to visit with the pigs, got back into the sea plane which then took off!

On Sunday evening we went up to the Hill Top House Restaurant on Fowl Cay Resort. It was a nice meal in a beautiful setting, but pretty expensive for what it was – even though it was an all-you-can-drink open bar! Staniel Cay Yacht Club was much better value.

On Monday we upped anchor to go island-hopping  in Northern Exuma. We dropped anchor just outside the mooring field* at Emerald Rock in the Exuma Sea And Land Park.  There was an absolutely beautiful beach just to our south which was a third of a mile of soft white sand and perfect for long exercise walks. First night there was a bit of a roll and some noise from doors rattling on board. So we used some ear plugs to resolve the issues- but not how they would usually be deployed. 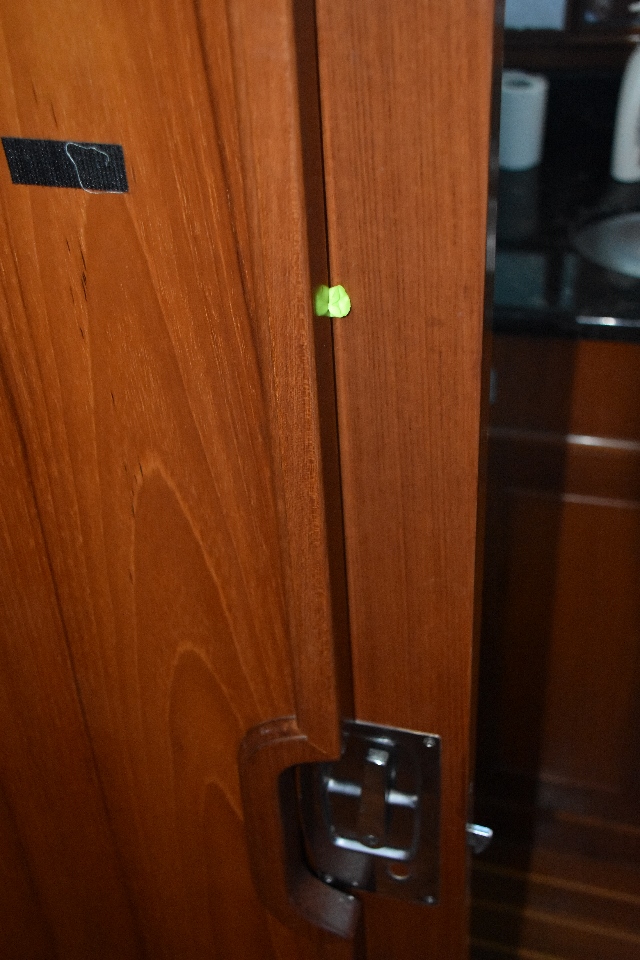 We stayed at the Park until Wednesday, when we headed for Norman’s which has a very interesting history – more on that in the next post.