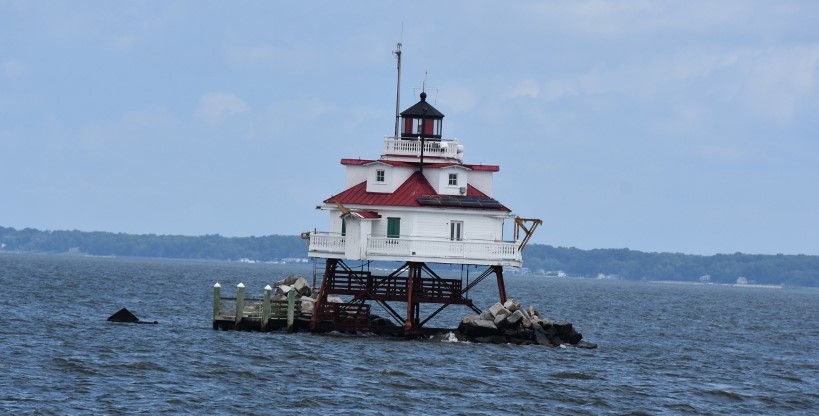 Today was to be our last full day in DC. Paschal and Margaret were aiming for the American History Museum and then the monuments and memorials on the Mall. The four of us on the boat set off for a walking tour of the Capitol Building. We watched a movie about the history of the Capitol and the process followed to decide the political structure of the country. We then visited the Crypt, the Rotunda and the hall of statues. After lunch at the Capitol we took the tunnel connecting the Capitol to the Library of Congress. We had a look at the Guttenberg Bible, the Reading Room overlook before walking back down the mall. We returned to Sonas where John and Anne Marie packed, leaving Sonas the next day for a few days on the beach at Ocean City MD.

Later that afternoon Ocean Dancer, an Ocean Yacht 48, pulled into the T-Head behind us. Paul went out to say hello and found out that we had previously spoken to the owners on the radio while in the Exumas last year! We swapped cards and, since Bill and KelliRae would be following us to our other destinations, we hope to catch up later.

This evening we all met up and took an Uber to Chinatown and had dinner at Reren. This was one of the top picks on TripAdvisor and the food was excellent, though one or two of us (well really only one of us) didn’t realize that bean curd was tofu and got a shock when it was delivered!! We were eating family style so it really didn’t matter!

First thing we put on our backpacks and walked the half mile to Safeway and reprovisioned with milk, veggies, fruit, bread and necessities. Then we said goodbye for now to John and Anne Marie and hello to Paschal and Margaret who were coming on board for a four day trip to Annapolis. John and Anne Marie were renting a car  for a few days and then meeting  us in Annapolis.

We headed back down the Potomac, keeping a close watch for flood debris. Surprisingly we saw very little. Our target anchorage was Chapel Point on the Tobacco River and we pulled in and were anchored by mid-afternoon. Sian and Paschal went for a swim and we had a blissfully quiet night in the anchorage.

We were out of the Chapel Point anchorage by eight as we wanted to get to our next anchorage off Historic St Mary’s in time to go ashore and visit the old city, parts of which have been restored. Again it was an uneventful trip, with no sign of any debris, although the coast guard came on regularly to warn of debris in both the Potomac and Chesapeake.

We dropped anchor off St Mary’s around one thirty. We launched the dinghy and went ashore to walk up the historic village. Since it was closing at four we got reduced admission. We quickly headed down to the dock and went on board the Maryland Dove – a recreated 17th century sailing vessel. We took the tour below and above decks and chatted with the reenactor. We then headed off to the Indian village and then the chapel. This was all we had time for before the historical village closed for the day. Definitely a worthwhile stop, if you can fit it in.

Back on Sonas Paul decided to have a look at the guest head which had been leaking a little previously but had gotten much worse in the last couple of days. He dismantled the Vacuflush commode and identified the issue. He replaced the vacuum breaker but then struggled to get the head back together again – in the end requiring three pairs of hands to hold all the parts together while he tightened everything. So far so good and the toilet is now behaving!

The anchorage at St Mary’s is very well protected from any wind from the south, and we awoke to a light wind. When we turned the point to leave the anchor we found an eighteen knot wind on our bow. It was from the south so was quite warm. We got to the Potomac and headed east towards Point Look Out. As we were leaving Mary’s River a blue hulled Kady Krogen was behind us. As Invictus passed us on the Chesapeake we realized that we had shared a marina in the Abacos in the spring.  We radioed them and had a pleasant chat about the Abacos, where they been and where they were going.

We arrived at our overnight stop at Harbor Island Marina in Solomons and hailed the dock, with no luck. Another boater advised us to call on the phone instead, which we did, still with no luck. We continued to radio and call until we stood off the marina. Still no answer. So we tied up at the long fuel dock. About a half hour later a dockhand came along and moved us further along the fuel dock for the night.

AND… the guest toilet got plugged up. So while Paschal and Margaret went for coffee and Key Lime Pie, Paul got busy with the plunger and got it freed up.

This evening we went to the Lighthouse Grill for an excellent seafood meal.

We tried to sneak off the dock without using the bow thruster this morning so as to let Paschal and Margaret stay in bed. However once they heard the engines start they got up to help us set off! We went back out into the Bay and set a course to Thomas Point, just off Annapolis. The GPS showed that it was 35KM away. Our course took us diagonally across the bay which curves from a north west direction to a north east direction. So we headed towards the east bank and then back gain to the west bank! We passed a few barges and bulk carriers on our way. We also were passed by three beautiful restored 1920s Chesapeake Oyster skips. 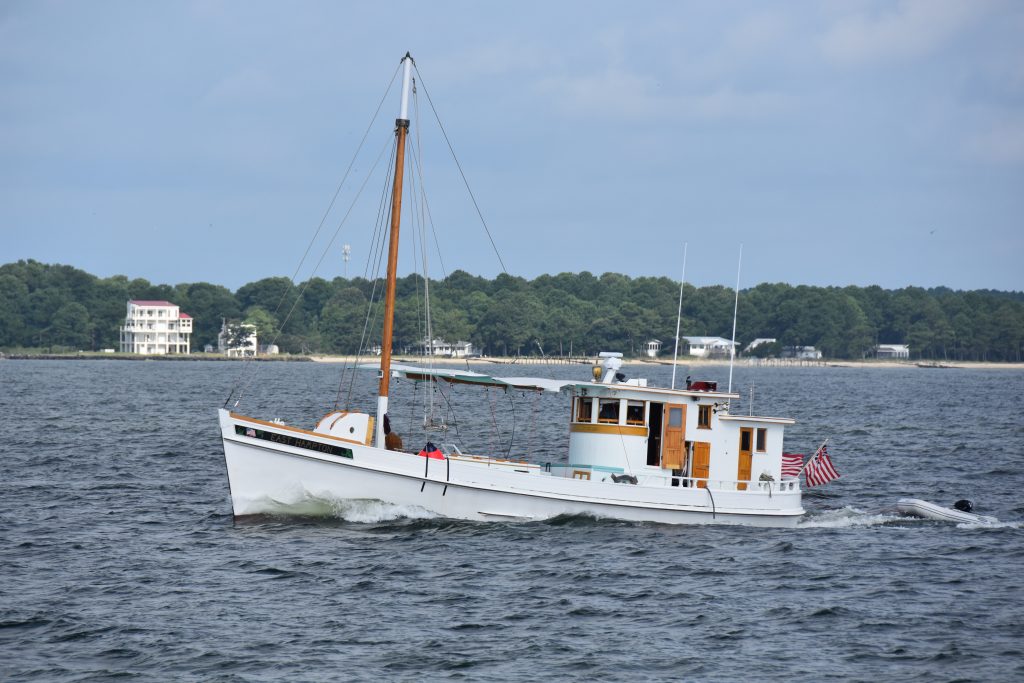 Once at our mark Paul took Sonas into the river. We were surprised at the number of crab pots and clam lines that were strung across the river entrance, given that Annapolis is such a busy river. As we went further in Paul realized that there was not a city ahead of us. Slowing Sonas and checking the paper charts he realized that we had turned directly east before Thomas Point and entered the South River. We needed to go past Thomas Point light and then turn to the north wast to enter the Severn River. That explained all the crab and clam lines we saw!

We backed out and went around Thomas Point light and past the big ships that were waiting there for their turn into Baltimore. As we made the turn for the Severn River we saw plenty of boating. Entering Annapolis we had to made our way slowly past three different sets of children in small racing dinghies, followed by the well laid out mooring field. We then called Yacht Harbor Company for our slip assignment and were assigned the 104 foot long slip number five.

After tying up Paul arranged an Uber for Sian and Margaret to go to the supermarket while he checked in. By the time they got back John and Anne Marie had rejoined us and we took a walk through town, and had dinner at Red Red Wine. After dinner we walked over to the Naval Academy to find where we were starting our walking tour, planned for the next morning.

John and Anne Marie brought their luggage from their hotel as Paschal and Margaret were leaving us today to fly back to Ireland. We then went over to the US Naval Academy and took a guided walking tour of the impressive facility. We heard about how the 4500 midshipmen are selected, go through Plebe Summer, and later shed their dixie cup hats and move to third class midshipmen. We saw their training facilities, the dorm, Memorial Hall, chapel, and heard about the various traditions.

After lunch on board Paschal and Margaret bade farewell and caught an Uber to Dulles. Just before they left some old friends of ours from Yardley PA, Jim and Eve, who had run their sailboat down from the Bohemia River, came to visit.

We went to Saturday mass at the beautiful St Mary’s church before  the four of us who were left had a light dinner at Harvest.

We left our slip and went over to the fuel dock and pumped out the holding tank, then set out for our next stop of Cambridge, Southbound on the Eastern shore. There was not a breath of wind and water of glass. We made very good time so decided to go into the very pleasant Lecompte Bay, drop the anchor and have lunch and a swim.

We then continued into Cambridge. We read on the cruising guide that we could tie up at a bulkhead wall in front of the county building. This was easy to find and there were no boats there when we arrived, so tying up was simple. The cleats on the wall are quite small and in need of repair so would be suspect in a blow. Also there are no power pedestals there so we turned on the generator.

We walked through the small downtown and, due to the heat, we were the only people on foot, meeting no one else on our walk. We discovered that Cambridge was a key stopping point on the Underground Railway.

We were so hot that we decided to stop in at the RAR microbrewery for a beer. Afterwards we walked through the graveyard of the Grace Episcopal Church, which was previously one of the original Church of England churches set up by King William and Queen Mary in 1693. Buried here are five Maryland governors with graves dating from 1674, including many revolutionary war dead.

We then decided we were still a bit hot so walked past Sonas to Snappers restaurant and Tiki Bar for another round!

Meanwhile, back on Sonas, Sian had a joint of lamb cooking in the slow cooker and when we got back we added roast potatoes, asparagus, and some onion and mushroom gravy to it for a great meal back on board.