It was 2:00pm on the Friday before Thanksgiving and Paul had just finished the last work meeting of the week. The Queen’s Harbour Yacht Club had been trying to organize a cruise to St Augustine for the beginning of Nights Of Lights, but the damage from Hurricane Matthew had left all three main marinas short of slips so we had to cancel the trip.

During Thanksgiving week we would be decorating Sonas for the lighted Boat Parade on December 3rd. That would mean not being able to use her until the new year. So rather than sit there we decided to throw some food and wine on Sonas and head up to our favorite anchorage for the evening, and squeeze in one more little trip.

The weather was spectacular, it was in the mid seventies, which meant a little chill in the air as we motored along. We were all settled at the anchorage by 3:30. Paul had actually brought a book with him since it got dark pretty early and he could settle down to read for once rather than catching up on boat chores!

We watched as around 4:30 a trawler came into the anchorage and slowly went past us further up into the river. We wondered if they knew the layout of the river as there are some tricky shoaling up there. Sure enough they hit the sandbar. Paul quickly jumped into the RIB and went down to see if he could get them off. The tide was flooding out and if they didn’t get off they would be there for another five hours or so. 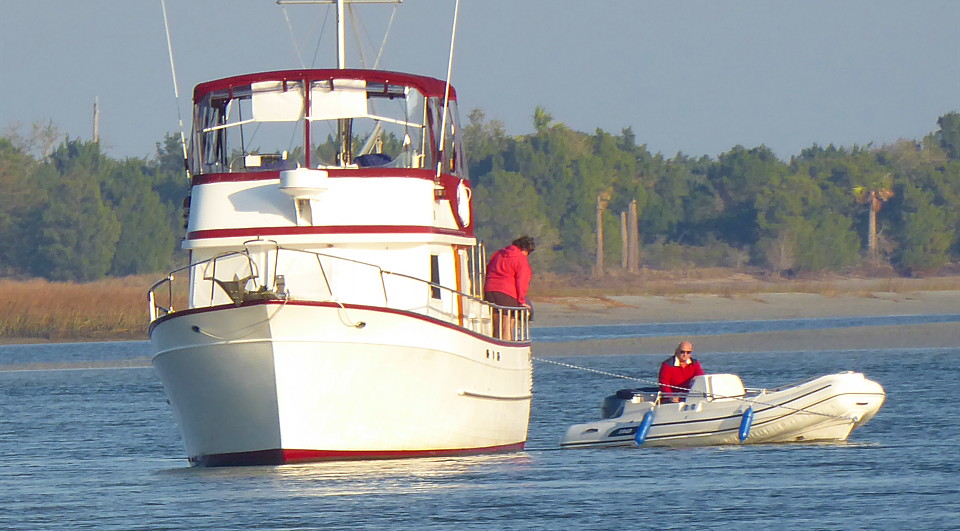 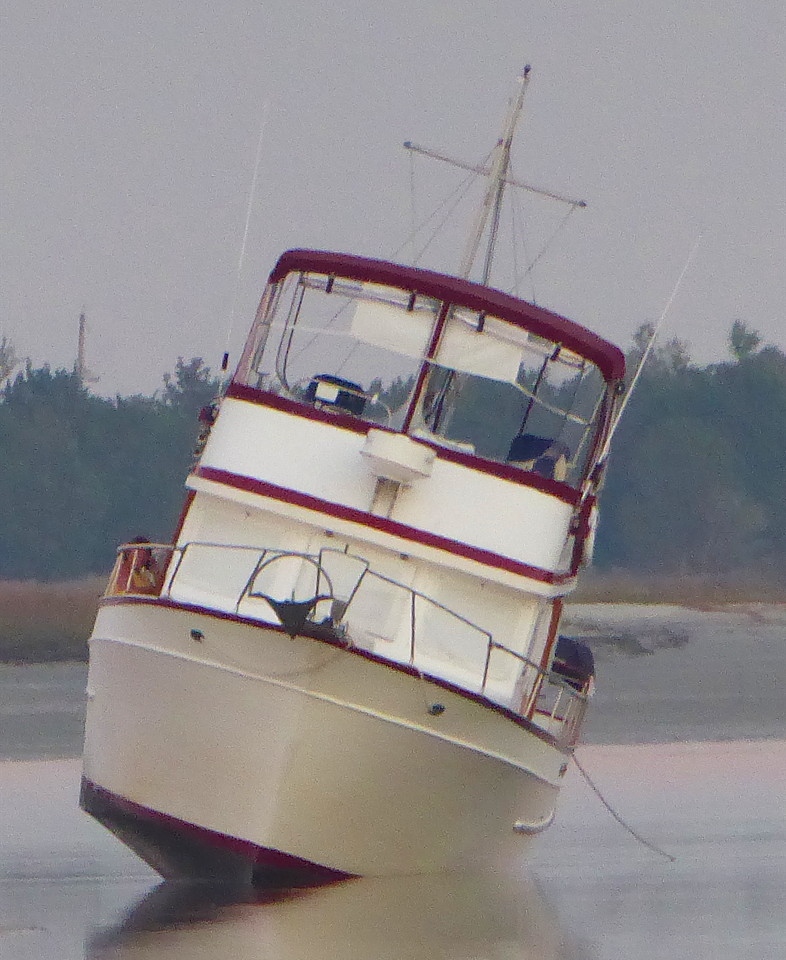 Unfortunately they were not successful in getting her off.  Paul helped the other captain lay an anchor so when the tide came in the boat would rise and be directed into deeper water.  When he got back to Sonas he grumbled: “so much for sitting down to read that book!”

We had a nice dinner of filet mignon from the grill, a glass or two of our new favorite grape Carmenere, and watch Grumpy Old Men on the DVD player, before bunking down.

Paul awoke in the middle of the night and looked at the clock to see what time it was and the clock was off. That meant that the inverter (which makes AC electricity out of DC battery power) was not making electricity. He got up to see what the problem was and discovered that, by running all day from the batteries (including the big household fridge/freezer) we had drawn the batteries too low. So he cranked up the generator to recharge the batteries and came back to bed.

The next morning brought some chill with it, but an absolutely gorgeous daybreak. Sian took Grace for a morning walk as Paul got the coffee going. David, the captain of the trawler that Paul helped, came on board and we chatted for a while. They were from York, Pennsylvania and kept their boat on the Maryland section of the Chesapeake Bay. They were on their first real cruise aboard their boat, and were on their way to spend a few weeks in St Augustine and then head down to Vero Beach for the winter.

Around noon we took Grace for a walk around Kingsley Plantation then upped anchor and headed back to home dock.

We feel so blessed to be able to enjoy the nature around us on Sonas and with Paul retiring at the end of the year we look forward to lots of time on board in 2017.

4 thoughts on “A Last Evening At Anchor”