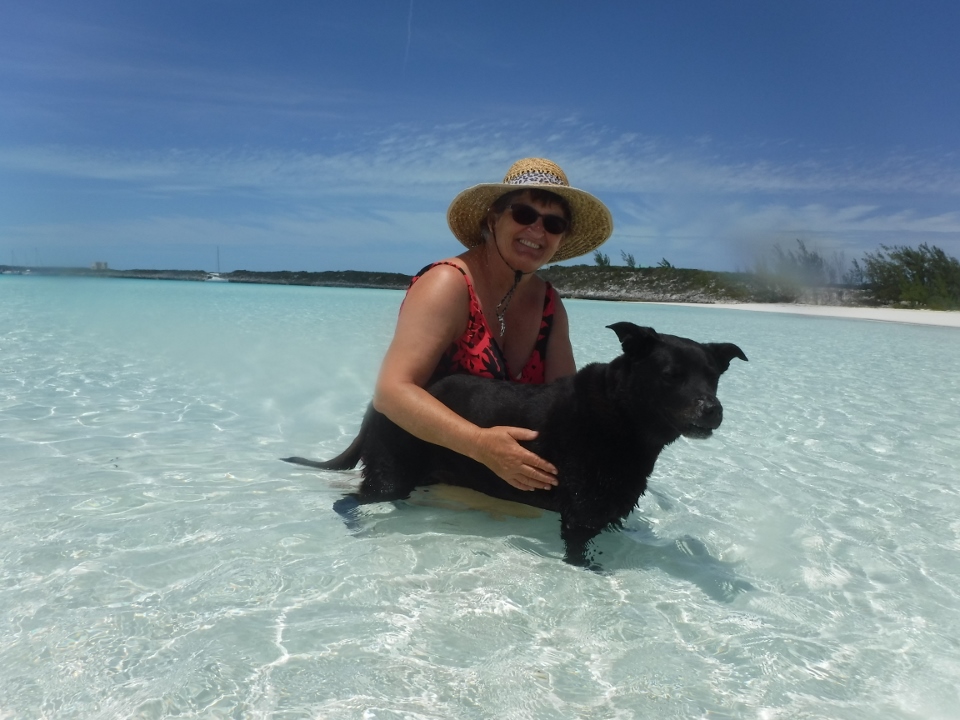 Let’s Find As Many Quiet Anchorages as We Can!

Monday April 3rd through Sunday April 9th
Williams Cay was so beautiful and quiet that we decided to stay for a few days. We swam, walked, watched sunrises and sunsets, and generally chilled like we have not chilled in years. Most of the time we were on our own, but now and then another boat stopped by.

We had one annoying issue crop up and that was the starboard stabilizer* started to squeak while we were at anchor. Since this is right by the master cabin it disturbed our sleep. Paul hunted high and low for our can of WD40 but couldn’t find it – finally going over to another boat and borrowing theirs. He liberally doused the stabilizer and it worked for a while but then started squeaking again. This time he put the lock bar on it so it wouldn’t move at all. We just need to remember to unlock it each time we want to use the stabilizers.

Paul also used the time to get after some issues we had with both heads*, as they were not priming the vacuum properly. He was able to tighten the connections on the head for the master cabin and that is working fine now, but discovered that the vacuum bellows for the guest head may be punctured so it is not holding the vacuum. So that needs to be turned on and off at the battery breaker panel each time it will be used. Not a big issue as our next guests don’t arrive for another month. Both heads will need a good overhaul when we get back home.

Lee Stocking Cay used to be owned by John Perry, a rich newspaperman. He stared up a Marine Institute on the island to study Caribbean marine life. This was later taken over by NOAA. Around 2012 it was abandoned, supposedly because of lack of grant funding, and everything was just left there – including a pick-up truck! We tried to visit and walk around the ghost town but when we approached the dock there was a significant chop and lots of rusty bolts on the dock, so we decided not to risk the RIB*. We noticed a couple on men working on one of the buildings and later learned that the island has been purchased and was being refurbished.

The next day, Wednesday, we made the difficult decision to move on or we wouldn’t see anywhere else in the islands! We had planned on moving about an hour north to Rudder Cut Cay where there was a “pond” we could anchor in. It looked really interesting on the charts and on the satellite image, and somewhere that was well protected and quiet. The cruising guide did warn us, however, that it was well protected by sand bars on both sides of the approach and a shallow sand bar across the mouth. We did try to enter, but had not timed it well and arrived there at low tide. We started to churn up sand from our props so decided to give up on that idea and go further along to Little Farmer’s Cay which we had heard good things about. We will leave trying the pond for another day.

As we motored north towards Little Farmer’s we past the group of islands that are owned by David Copperfield. One of these, Musha, looks absolutely stunning, with palmed lined beaches and beautiful sand shallows.

We anchored off Little Farmer’s, just to the north of the Little Farmer’s Yacht Club, which is really just a jetty that could hold maybe five or six boats. There was a rusted ship wreck on the beach to the east of us. We went ashore and had a look around. Sian wanted a couple of post cards so we went to the grocery store. When we asked if they had any cards they simply said no. We then walked to the Ocean Cabin restaurant right behind the grocery store to find that he had plenty of cards for sale – why the lady in the grocery store could not have told us that! While at Ocean Cabin we ordered two grouper dinners for that evening and had a chat with Terry, the owner, who by all accounts, is a bit of a philosopher. The first thing he told us was that we should not have said “hello,” he would rather prefer “HeavenHigh!” We learned that Terry has worked in Libya for Gadafi in the 70s as a “facilitator.” We didn’t probe further as to what the actually meant!

We then walked down to the “post office” to get some stamps for the post cards. It turned out to be a small building that was securely padlocked. Asking further we were told to go to Little Jeff’s house as that’s where the post office now was. Sian poked her head in there and there was no one around. Then a guy turned up, she asked him if he had any stamps, he shouted to his wife and she said “no, we don’t have any stamps!”
We still have the postcards!

We went back in for dinner and found Terry mixing his secret cocktail at the bar. He poured Paul one, then Sian took a sip and was able to guess four out of the five ingredients, finally guessing the fifth after a clue. We think she left Terry with the impression that Sian liked a drink on a hot day!

We were the only two guests in the restaurant, and ate dinner as we chatted to Terry, as we were finishing six other arrived for dinner from another boat.

On the dinghy dock we bought a portion of conch salad, watching as it was prepared and the unused pieces of conch were thrown to the turtles and sting rays circling the dock.

Thursday we decided to move on to find another quiet anchorage. The forecast was for winds from the South East, so we tucked ourselves to the north of White Point in Jack’s Bay which would protect us from that wind. Surprise, surprise the wind came from the South West instead and brought a good swell for most of the day. It did quieten down some in the evening. But not as calm a spot as we thought. We rocked and rolled all night, and not in a good way. We were the only boat there though – so there was that!

Looking at the forecast on Friday morning we saw that the winds were going to move north and then east for at least the next week, so we had to move. We simply motored about four miles to the south side of Black Point. This would be a great anchorage in those winds and there were two beautiful beaches to play on. As we walked the beach we saw the remnants of a marina and resort development that they had started in the early 2000s, which was abandoned in 2006 as the global economy weakened. There is talk about it being started again.

At sunset on Friday a flotilla of a half dozen sailboats came into the anchorage. The next day it was clear that they all knew each other by the way their dinghies criss-crossed between the boats. That afternoon we were visited by a cruiser who invited us to drinks and food on the beach that evening. There were about a dozen folks there when we arrived, a fire was well under way and hot dogs were being prepared. We had or cooler of beer and rum with us and stayed for an hour or so, declining the food as we had sirloin steaks waiting for us back on board! A Californian couple who own a house right by the bay joined us and we heard the story about the unusual sandcastle design of their home, as well as what it was like living part of the year on the Cay.

On Sunday we decided to catch up on some of the never-ending chores that are a part of living on board. Sian got after the sand that had spread throughout the boat while Paul took fresh water and cleaning pads to the woodwork and stainless rails in an effort to hold off the impact of salt water!

Around lunchtime, Jan and Tom from the DeFever 49 Elizabear anchored by us came across and invited us over. So later on Sunday we dinghy’d over and had cocktails as we chatted about our boats, both designed by Art DeFever, our children and our health. All in all a very pleasant evening.

*Stabilizer: there are a number of different variations of stabilizers – all meant to help keep a boat stable in heavy seas. Ours are fins that protrude from the undersides that are controlled by gyros (for sensing the sea action) and a hydraulic system run off engine power.

*Heads: toilets on a boat. So named because in old sailing ships the toilets were placed in the head of the ship – in the bow.

*RIB: Rigid Inflatable Boat. This is an inflatable boat that also has a hard bottom, usually fiberglass.  Much more stable than an all-inflatable boat and also more protection from rocky bottom beaches.

4 thoughts on “Let’s Find As Many Quiet Anchorages as We Can!”