We went to Mayport last night for dinner at one of the two remaining crab shacks in the fishing village – Singleton’s Seafood Shack. One of the more interesting aspects of the evening was a visit to the “museum” on one side of the restaurant. I took the opportunity to grab some photos of the model boats that Captain Ray built.

See below for a write up on Captain Ray Singleton from when he was awarded The Florida Folk Heritage Award. 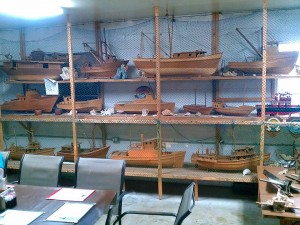 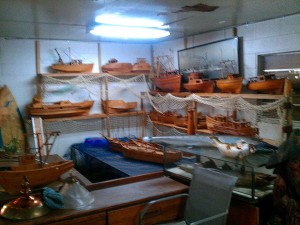 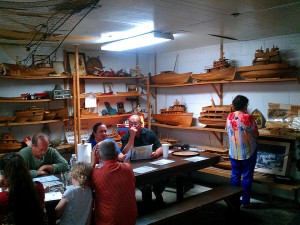 Captain Ray Singleton was a restaurateur, model boat builder, oral historian, and retired shrimper. He was born and raised in Mayport, a small fishing town in north of Jacksonville. Singleton’s grandfather, Bubba, came to Mayport to sail giant ships into the port. His grandmother, Aunt Sally, ran a hamburger and hot dog stand, at the town center, and his father skippered a dredge. By14, Singleton was working with various maritime industries, including working on charter fishing boats and shrimping. He and his wife Ann opened a fish market, which eventually became a well-regarded restaurant, Singleton’s Seafood Shack.  Except for four years on an aircraft carrier during World War II, Singleton spent his life in Mayport.

In the 1930s, he began building scale models of the shrimp boats he had known around the Mayport area. He worked without plans or photographs to recreate the vessels which, in many cases, no longer existed. He painted his early boats, but simply gave a polyurethane coating to the later ones to bring out the natural wood grain and color. Woods he used included poplar, mahogany and cedar. He did not sell these finely crafted and highly detailed models of actual boats, but displayed them in his restaurant.

Singleton was also a chronicler of local history and shared the lore and wisdom of the Mayport fishing community with a new generation; the boat models provided a natural starting point for hours of reminiscences. Although the models were by themselves, their value was magnified with the addition of his narratives about the vessels they represent.

Visitors can still view Singleton’s boats at the family restaurant. He passed on a passion for building model boats to his son Johnny, who continues to build model boats and lighthouses.