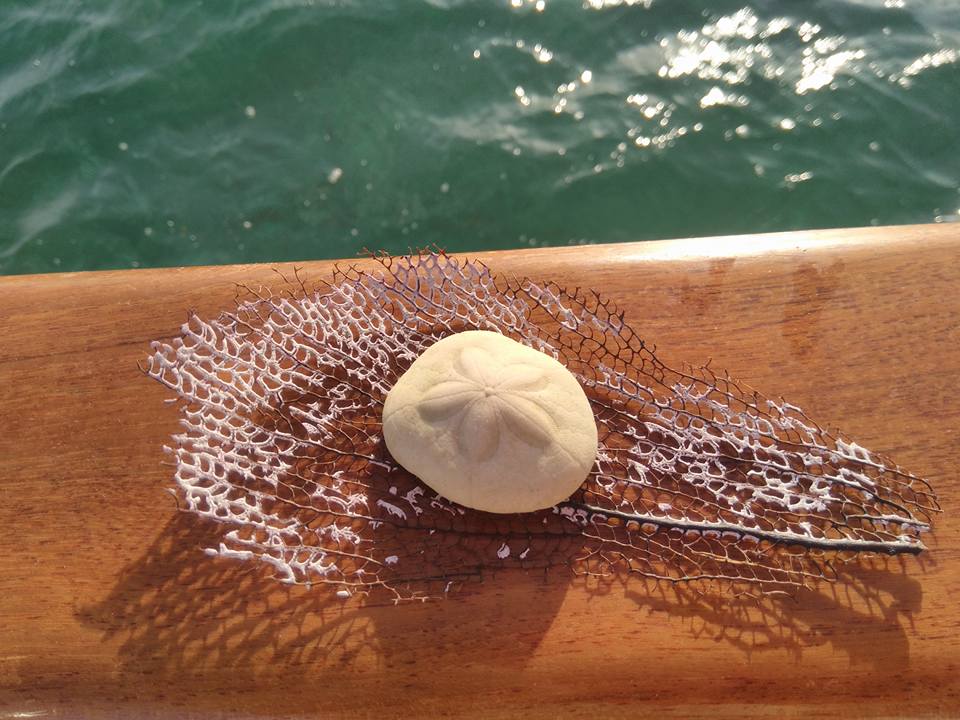 Thursday April 26th, dawned with beautiful , clear blue skies and found us anchored underneath the Elbow Reef Lighthouse. After breakfast we motored VERY slowly to the south east, with sometimes less than two feet clearance beneath the keel based on both charts and depth sounder! We were targeting a visit to Tahiti Beach, a snorkel on the reef off Sandy Cay, finally anchoring in the bay outside Little Harbour for dinner at Pete’s Pub. We weren’t able to go into the harbour there as we can only cross on a high tide. High tide was at 6:00pm, great for getting in, but then it was at 6:30 am – not so great for getting out after a night in the pub! So we were aiming for an anchorage outside!

Well that was the plan, but the wind had other ideas. It turned to the south east and stared blowing hard. We were able to lay down a lunch anchor off Tahiti Beach and walk the soft sand there. After lunch we navigated our way around the shallows of Tilloo Bank and entered the anchorage behind Sandy Cay to find a strong surge from the swell rolling in from the Atlantic through North Bar Channel. So we skipped the snorkeling and headed on down to Little Harbour. As we approached the bay outside Little Harbour we saw big breakers hitting the beach and realized that there was also a strong surge running through there from the ocean inlet by Little Harbour. That meant an overnight anchorage there was out of the question. We backtracked and joined a dozen boats anchored in the shelter off Lynyard Cay. This unfortunately meant that we would not be making it into Pete’s Pub this trip as the journey across in the dinghy was simply too dangerous in the large swell. So we broke out the rum and gin and made do!

Friday April 27th. Next morning we headed back towards the hub of Abaco. The wind had tracked to the south so the anchorage behind Sandy Cay was more sheltered enabling us to drop the hook and get the snorkel gear ready – including the new full face masks we now had. Dive Guana had suggested we clean the masks with toothpaste, smear it on with finger tips, rinse and apply anti fog gel before rinsing again. We followed instructions to the letter and had great results. We dinghy’d out of the anchorage and picked up one of the small mooring balls placed there for people to tie up and get over the reef.

We snorkeled the reef for an hour before heading back to Sonas. Those of us with “adult bodies” struggled to get into the inflatable dingy from the water with any modicum of dignity but managed by clawing, pushing and pulling. Adam, young, fit and able gave one almighty heave and climbed aboard in a simple fluid movement, no problems. Auntie Sian pushed him in the back ready to throw him overboard, but like a good Auntie, restrained at the last moment, but only just!

Off we went for a little treat. We entered the shallow waters between Elbow and Lubbers again and anchored right off Cracker P’s! We went in, squeezed our tender in between the many others tied up, and had a great lunch with a view! And another few adult beverages!

We ran from Lubbers Quarters to Man O War Cay. After going through the very narrow entrance we turned right and entered the east anchorage. We picked up a mooring buoy, got into the dinghy and headed into town. Half way there the heavens opened but luckily the covered Albury’s Ferry dock was clear so Paul steered the dinghy in there and we waited out the heavy rain, praying that a ferry would not turn up!

We tied up at the Man O’War marina and walked through the town. We had hoped to grab an ice cream but the  stand had just closed by the time we got there. So we walked up to the beach on the Atlantic side and then then bought a few things in the little store before heading back to Sonas.

Saturday April 28th. Adam was flying out from Marsh Harbour on Sunday, On leaving Man O’War we motored the short distance to the beach that sits between Scotland Cay and Great Guyana. There is no big boat anchorage so we had to anchor off the cay in an on shore wind so Paul stayed on board as anchor watch as there was quite a sea running into the beach. The others went ashore.

There was a rocky bar across the beach so Adam had to haul the dinghy across!

Leaving this beautiful spot we ran across to Mermaid Reef, just outside Marsh, and snorkeled the reef there. We first visited the reef way back in 2002 with our children and it is always a pleasure to go back. The reef is full of fish of many species, and we even saw a huge lobster. Paul had a bag of peas in his pocket so we gathered around him as he emptied the bag and we were engulfed in feeding fish!

Leaving the reef we headed into the harbour and anchored. That night, Adam’s last, we went into Snappa’s for dinner. They had a live band so there was dancing, with Peter providing a partner for the local single ladies!

Sunday April 29th. The next afternoon Peter and Paula said goodbye to Adam at the dock and we upped anchor and headed off.

We wanted to visit Matt Lowe’s Cay as we saw there were a couple of beautiful beaches there, and the anchorage was good for the wind we would get that night. After dropping anchor we took a cooler with beer and wine, deck chairs, and beach towels ashore and set up on the beach.

The island has been bought by a developer who has built a small canal system and is selling lots. We saw signs along the high water mark advising that the island was private and to be mindful of the guard dogs. No problem, we were fine just sitting on the beach.All beaches in the Bahamas are public up to the high water mark so we felt confident we were following the rules so all would be well.  As we used the beach we could hear the dogs, which sounded like they were locked up somewhere. The constant barking was a bit annoying.

Sian and Paula had gone for a walk along the beach and Paul was wading in the water, when all of a sudden three large dogs came out of the treeline barking and heading for Peter who was sitting on one of the beach chairs. He jumped up and, using the chair as a shield , backed into the water. The dogs (one brown, one white and brown and the other black) stopped at the water’s edge. Paul went to the dinghy, grabbed the metal bar that’s used to support the dinghy cover and walked towards the dogs smacking the bar into the water and then the sand. They went back into the trees but they were never far away, and appeared now and then in the tree line. We decided to pack up and go back to the boat!Unfortunately Paul did not have his camera with him or he would have taken video which would have helped the proper authorities deal with this issue. We will be reporting it.

That night we had the wonderful experience of a sunset over the port side of Sonas and then, about twenty minutes later, a wonderful moon rise over the starboard side!

Monday April 30th. The next morning we set sail, yet again, to spend two days in our favorite spot in the Abacos – Treasure Cay. This time we picked up a mooring in the basin and dinghy’d in to walk the beach, have drinks at the beach bar, sit by the pool (and have more drinks). The well protected basin kept the still high winds at bay.

Wednesday May 2nd. Leaving Treasure Cay we ran the hub of Abaco, past Man O’ War, past Hope Town and into the well protected Sea Spray Marina. This was a very tight marina, and the wind was still howling, but maneuvering a heavy boat like Sonas helps as it does not easily get pushed around by the wind. So we had no issues squeezing her into her slip.

We were on a deadline as the team Peter supports, Liverpool, were playing an important soccer game that afternoon. He headed off to the bar where they put the game on the TV for him. He was a happy man when they won the tie.

Casualty of the trip was the herb garden which apparently did not enjoy the salty spray washing over them. Another time we will bring them in doors to shelter in rough seas but its too late now!

In the evening we got cleaned up and headed to The Abaco Inn for dinner. The Abaco Inn sits on a hill overlooking both the Sea of Abaco on one side and the Atlantic on the other. It is both a fabulous location and an excellent establishment. On the way up we were passed by a young man on a motor bike. A couple of minutes later he came back along the road and Paul put his thumb out. The driver was game and put Paula on the back seat and off she went to the restaurant. He then returned and did the same with Sian!

We had a wonderful meal and would highly recommend the Abaco Inn to anyone looking for a quality meal on Elbow Cay.

Thursday May 3rd. Peter and Paul’s time with us was coming to an end. They were flying out of Marsh Harbour on Friday May 4th. So on Thursday we untied from Sea Spray and headed back over to Marsh. After anchoring we walked through town and up to Abaco Beach Resort/Boat Harbour to have a look around, some drinks and appetizers. We had booked a table at Wally’s across from Harbour View Marina for that evening, but then decided that a quiet evening aboard was the order of the day, so cancelled our reservation, and enjoyed dinner, drinks, and card games on board!

Friday May 4th. Sadly Friday arrived. Our guests packed up and, wrapping their luggage in black plastic bags due to the winds and choppy water, loaded up the dinghy. They hugged Sian and then Paul took them ashore. More hugs and they were off on the taxi to the airport. Right on time their flight took off and did a fly-by right over Sonas in the harbour!

We had originally planned on starting our journey back to the US right after they left. However the forecast was calling for winds over 30mph and thunderstorms. Since these winds were from the NE they made Whale Cay Channel dangerous. We spent the afternoon readying the boat for sea crossings, hunkered down when the wind gusts were high and planned an early night for an early departure. Looking ahead the weather for crossing the Gulf Stream is decent for Sunday, even better for Monday and Tuesday, so we knew we could ride out the weather in Marsh Harbour and head off on Saturday when the forecast suggested some calmer weather..