We had ten yacht club boats and eighteen land-yachters head down to St Augustine for the first weekend of the 2017 Nights of Lights. There were a number of new members  we got to meet and introduce to the QHYC lifestyle! Due to the damage to the St Augustine Municipal Marina from hurricane Irma we had to spread the boats between the city marina and Comanche Cove Marina. Even then, not all of the boats at the city marina had a power supply and some had to rely on their on-board generators. The club had reserved specific private times with the the water-taxi between Comanche Cove and the city docks to make sure that people could get over easily to enjoy the town and the events we had planned.

Our schedule for the weekend was:

Sonas  had a slip one in from the fuel dock. Initially it was supposed to be with no power. But we noticed that the nearest boat to us on the fuel dock was just using the 30amp. So we asked if we could use their 50amp. We were able to piggy back a 50 foot and 25 foot cord and get power to our boat.

Due to good planning and excellent volunteers, the weekend went to plan. The staff at the marinas, as always, were top notch. We had also set up a WhatsApp group specifically for the trip so people where able to stay connected to what was happening, find out where others were having lunch, and what they were doing during the day. It was also helpful to answer any questions and get information.

We could not have asked for better weather on Friday and Saturday. Most of us were able to stay in shorts and t-shirts during the day. Sunday, for the return trips, started off cloudy, cold and rainy. But improved by afternoon.

The food at the Columbia was excellent (although one paella meal went astray for a while (the one Sian and I were sharing), but we got that sorted out!).

Friday evening and overnight was calm with no winds whatsoever, resulting in restful nights for those in the condos at Camanche cove and those staying on board.

Saturday arrived with a wonderful sunrise, and bright blue skies.

On Saturday members walked through town where some had breakfast. Sian organized a group to visit the Lightner Museum to see the Downton Abbey exhibition currently underway there. Most members had lunch in town before heading back to the condos and boats to prepares for the Docktail and the Lighting ceremony.

Sian and I had lunch at the Prohibition Inn. The beer list was awesome, and the burgers were too! 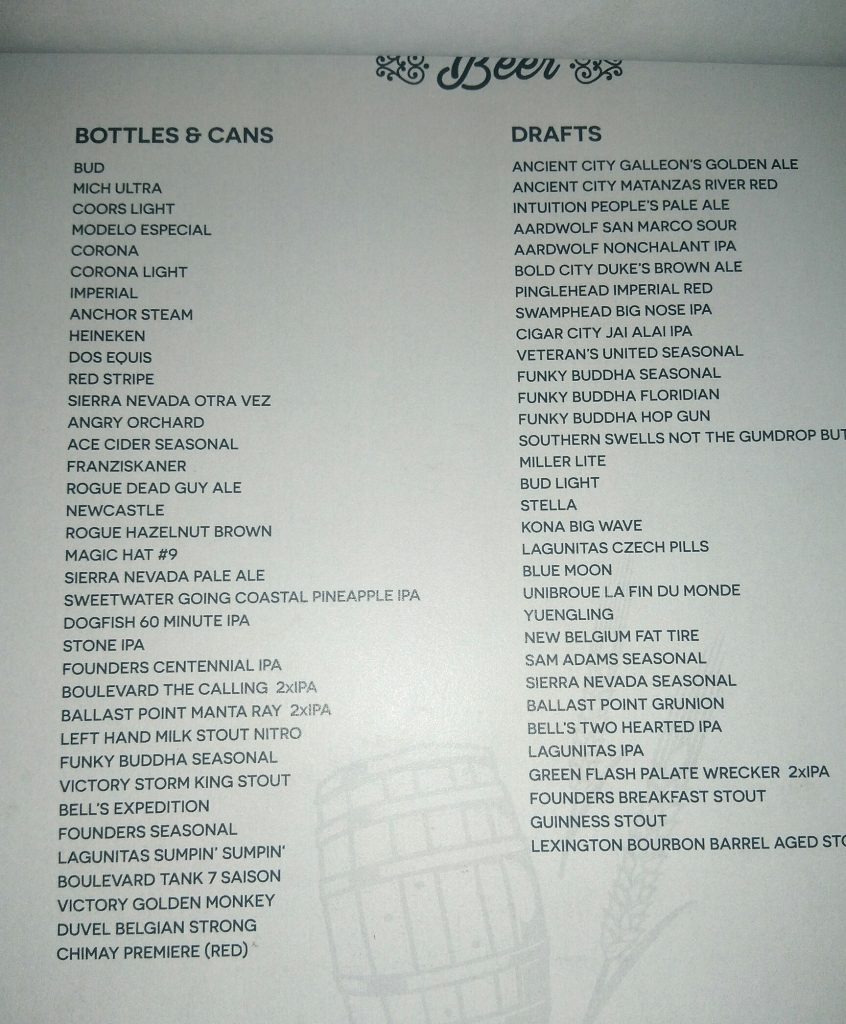 Everyone got to the meeting place on the dock on time, had a warming drink, before walking into Constitution Square where a band was playing on the stage. Amazingly promptly at 6:30 the MC introduced the VIPs for the lighting, including those who led the recovery from this year’s storms. There was a short ten second countdown to turn on the Christmas tree lights first, followed by another to switch on the millions of lights throughout the city.

Click below to run the video of the lighting.

After the ceremony we all headed back to the marina and got the docktail underway. At 7:00 the Pizzas arrived, we added the cheese plates, dips and fruit, and we ate and drank our fill listening to Christmas music until around 10:00, at which time the last water taxi took people back and the boaters retired happy to perhaps one final night cap and bed!

During the evening Paul chatted to Winky and Cindy aboard Vagabond, which tied up in the next slip. They were on their way to Hope Town in the Abacos to spend the winter months. We told them, if all things worked out, we would see them there next March!

Click below to run the video of the Docktail.

An excellent day’s fun and entertainment.

Sunday arrived cloudy and cold, with a promise of rain. All of the boaters left early and everyone was safely back in home port by lunchtime. All of the land yachters meandered their way home safely as well.

Rain on the ICW

Even the St Augustine birds clustered together to stay warm! Click below to run the video of the birds on the dock.

Some more photographs of the weekend in the gallery below.